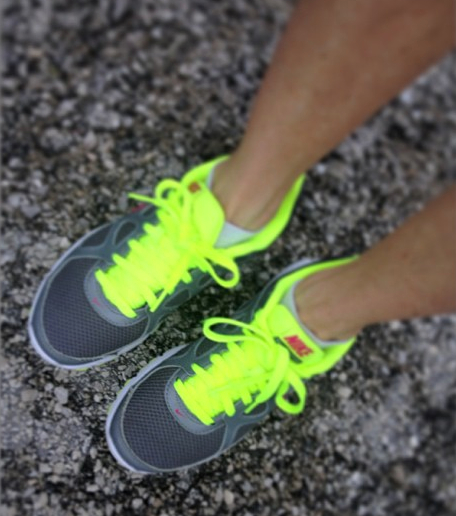 Last year I bought a pair of sneakers with glow in the dark laces.  I liked the idea of knowing where I stood, even if I couldn’t see anything else.  That pretty much sums up where I am in life today. And the reality is, I’ve been running in the dark since this blog began.  The sun went down in December and I haven’t known anything of the path in front of me for the past four months. The only thing I’m hearing from up ahead is,

You may be tempted to think I’m waxing poetic here.  No. I’m speaking practically.  We are in the midst of preparing our house and farm for sale, plus the better portion of all we own, and moving into the next phase of whatever ministry God has marked out for our family.  We don’t know what that is yet.

We are Abram’s clan readying the caravan in Haran.

It’s awesome.  And it’s not.   Just like any good roller coaster ride, your hands are in the air and you’re screaming for joy and the next minute you feel like you’re going to hurl, and then comes another hill and you let go and scream holy moly again and its thrills and its chills and its awesome and then, well,  its just not.

Honestly, I’ve been doing pretty well.  I can’t see a step ahead or beside and there isn’t a ton of time to reflect where you’ve been when you’re running blind, so I just keep pressing on and  pressing in close to make sure I don’t miss what God has to say at any given moment.  The nearness of Him is my STRENGTH.

And the nearness of Him is my JOY.

Still, there are those moments.   I’m finding that the hardest part of having no illumination beyond a lamp unto my feet, and a light unto my path (which is what, a step or two?) is the loss of direction.

It’s just plain hard to keep forward momentum when you’re not sure where you’re going.   I know in my head that I don’t need a map, or a little blue line on GPS to follow, I’ve got something so much more valuable to guide me.

I’ve got Him.  The voice behind me, whenever I turn to the right or to the left saying, “This is the way, my child, walk in it.”

So I’m going to keep logging miles.  I’m absolutely convinced that the miles I cover in the dark count for something more than the ones I run in the light.  Why?

Because without faith, it’s impossible to please God.

Don’t just skim that.  Please.  Park on it a minute.

Once, I asked my husband what he thought the opposite of faith was.  I was thinking unbelief, doubt, etc.  He quickly, and correctly, answered, “Sight.” This is according to Hebrews 11:1 – Faith is the substance of things not seen but hoped for.

I can run in the light all day long without faith.  I can see after all! But let’s be real, in the dark, I might be able to shuffle along a little way, but it takes an active trust – one that would cost me something if it failed – to actually run in the dark.

SO this past week, while I was actively, faithfully, blindly running my race, I started hitting some walls. Literally, not figuratively. One after another.

After about three hard stops, I faced my first real fear since all this began.  It came in moments, and by taking big deep breaths of God’s grace, and specifically of God’s word, my racing heart was stilled.

It reminded me of the day I discovered that previously undiscovered phobias can emerge when pressed just the right way.

Years ago, at a pumpkin patch somewhere in Missouri,  my husband, who I like to call Superman, had just emerged from a straw bale maze/fortress with our two oldest children in tow.  He was a little wild-eyed and he laughed uncomfortably on approach.  “How was it?” I asked.  “Wow,” he said, “that actually made me feel just a twinge claustrophobic….you should take them through!”

The girls showed no signs of any trauma from their first trip in.  They were eager to return for round two!  After all, they had been lovingly guided through the dark by the hand of their father, Superman.  We all see him that way.

If I had known in that moment what was before me, I probably wouldn’t have proceeded.  But the girls were tugging on me to forge ahead, and how hard of a maze could it be?  It was built for kids after all.  This was going to be fun!

It wasn’t long before I started running into dead ends.  As I shuffled down one 2-foot wide, pitch black hallway after another, each would end in a wall.  At about the third dead end, I could feel the panic starting to rise up in me like some sort of tsunami.  I was trapped and I was about to lose it.  I mean really lose it.  I could feel my little girls clutching my hands, still okay so far as I could tell, having no idea that they were only moments away from being scarred by life, because some madman decided to imprison their mommy in a house of straw where she lost her mind because of darkness and dead ends and no one to lead her!

A “twinge” of claustrophobia Superman had said?  You’re kidding me, right?

I was praying hard when the light came round the corner and moments later the little kid attached to the flashlight showed up behind it.  I nearly leveled my own girls as I lurched forward and grabbed the poor child by the arm, “DO YOU KNOW THE WAY OUT??”

“Yeah, sure,” says the 7 year old.  It’s not hard when you’ve got a torch.  I wonder if he knows what a hero he is?  Knows that he saved three lives that day???

Superman later confessed he was ready bring it all down around him by throwing his back into it should he have found no other way out.  That’s what got him through it when HE broke out in a cold sweat.  Thankfully that contingency was not required.  Having escaped, he showed no hesitation in cheerfully sending me in.  To what end?

Well our kiddos were dying to do it again!  For them, it was fun!  And he didn’t want to go through it again.  It was my turn to pay the parental dues.

So here’s the thing.

Darkness, loss of direction and hard, unplanned stops can be overwhelming  if you’re the one in charge.

If, however, you’re following…

Holding the hand of Someone you can trust completely, well…

The experience is completely transformed. You come out of it, begging to go back in and do it again straight away.  You come away counting it all joy.

Trust the One who is leading you.  Because really, there’s not a navigational system on planet earth with better wherewithal to get you where you need to be than your Heavenly Father.

Listen to what He says and don’t hesitate to do it.  When you’ve got someone leading you blind, taking time to decide whether you will or won’t follow His directions, is high risk.  If you’re a Jesus follower, the issue of whether or not you’ll do what He asks should already be settled.  Do it when He says it.

If I had a choice (which honestly I don’t) I’d wait in line for this ride I’m on, over and over again.

“The light shines in the darkness, and the darkness has not overcome it.”    John 1:5 (ESV)